Joel Milne is a relatively new member of the Cornerstone family. You can always tell when he’s in the office, his smile 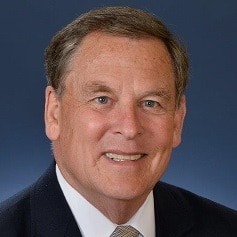 and booming “Good morning, how are you?” greetings can be heard throughout the office. His genuine happiness is contagious and it’s hard for anyone here not to smile when you see him coming your way.

Getting to know the tunes he literally jovially whistles while he works and seeing his zest for life, more so than many of the 20 and 30 somethings in our office have, I was astounded in a meeting a few months ago when he shared that he had been cancer free for 1 year. “Wait. Cancer free? Cancer? Joel Milne?” My mind grappled with the idea that such a genuinely happy and joyful person could have battled cancer just a year ago and remain so positive.

“I can’t believe you’ve had cancer!” I exclaimed. “Twice!” he said with a look of triumph on his face. He had won. Not once, but twice. This additional news left me speechless. It made me look at myself and the people around me in a completely different way. How could someone who has fought for their life twice only a year ago be so positive and full of life? I walk around the office with my cup of coffee like a zombie. I muster smiles to those I can and mutter a quiet “hello”, but here is a man who brings smiles to everyone’s faces everyday and if anyone had a reason to saunter around the office like a zombie it would be him.

I’ve been intrigued and impressed by Joel since he started here at Cornerstone, but with this new information I was even more impressed. I wanted to know how you can experience such a terrifying scare and remain so positive and happy. How do you let go of resentment, pain, feeling that the world has failed you in some way? So Joel kindly agreed to answer some of my questions. I must say, his answers will show you just how he was able to fight this terrible sickness twice and win; positivity, family, faith, a sense of humor, and a strong will to fight.

How old were you when you were first diagnosed?
I was diagnosed with bladder cancer 2 years ago, on April 10, 2013, 3 weeks before my 65th birthday. The tumor was removed on May 8 and was classified as Stage T1, Grade 3 (high grade). Additional cancer had advanced into my left ureter so more invasive follow-up surgery was performed on June 12 to remove a portion of this ureter and reattach it to my bladder in a new location.
What goes through your mind when you hear the news?
I pretty much expected the diagnosis before we even learned the results of the biopsy. My wife and I were both surprisingly calm. We had faith that everything would work out as it was supposed to, and knew that worrying about it wouldn’t solve anything. I trusted my urologist and knew that I was in good hands.
Was your initial thought to fight?
You bet! We were determined to be aggressive in treating this cancer.
How long was treatment?
After the surgeries I went through a regimen of 6 BCG treatments in late July and August 2013. During each treatment, BCG (a vaccine derived from live tuberculosis bacteria) was introduced into my bladder for 2 hours. This helps to activate the immune system to fight any foreign cells that remain in the bladder.
What was the worst part of treatment?
The BCG treatments are pretty invasive and uncomfortable – a catheter is used to instill the vaccine bacteria into the bladder, and the BCG is supposed to remain in the bladder for 2 hours. However, I guess the worst (but most important) part of the ongoing treatment for bladder cancer is the continual testing that must take place. My type and grade of cancer leads to a recurrence rate of 60%-80%. I’m now 2 years “cancer free” but I have to undergo a cystoscopy (internal scope of the bladder) every 4 months to see if there has been any recurrence. If all goes well for another 2 years I will then only have to have a scope every 6 months, and then every year after another 2 years.
What was your biggest motivation throughout the entire process?
I have the most wonderful wife and family anyone could ever hope for. We have 2 beautiful and talented daughters who are married to two amazing men, and five rambunctious grandchildren.
When you were diagnosed a second time was it the same type of cancer?
In January 2014 I had an annual physical with my regular physician. He noticed that I had some abnormal results on a PSA test and recommended that I bring this to the attention of my urologist. Later that month, right after receiving an “all clear” following my second post-surgery bladder scope, I underwent a prostate biopsy. Sure enough – 7 of the 12 samples came back “positive” for aggressive prostate cancer. This was a second primary cancer with no relation to the bladder cancer.
How long between remission were you diagnosed again? 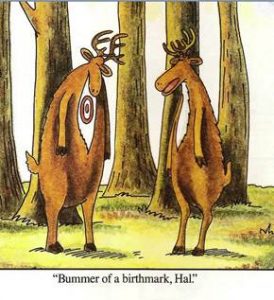 This second cancer was diagnosed a little over 6 months after completing my surgeries for the bladder cancer.
Having beat cancer before did you have more confidence and/or strength going through it the second time?
Actually, when I got that news about the prostate cancer, I felt kind of like “Hal” in that famous Gary Larson cartoon.  I immediately thought, “You’ve got to be kidding me!” I had completed my BCG treatments and had just received my second “all clear” on the bladder cancer. But, once again, I wasn’t frightened or worried. The cancer had advanced near the outer wall of the prostate, so it was recommended that I undergo radiation treatment rather than surgery that might expose my abdominal cavity to cancer. I had external beam radiation treatments every day for 7 weeks. During that period I also underwent two much more invasive procedures where high dosage radiation “seeds” were temporarily introduced into my prostate and then removed.
How long have you been in remission now?
I finished all my radiation treatments in late May 2014, so I have been “cancer free” from both bladder and prostate cancer for just over a year now.
What is the biggest thing you’ve learned through everything you went through?
Remember the old phrase, “Don’t sweat the small stuff?” You know what? Almost everything is “small stuff.” I’ve come to realize that most of the things I used to worry about were tomorrow’s problems that couldn’t be solved today. Even more important, most of the things I worried about never took place!
What advice would give people going through this themselves or with a family member or friend? What is the best way to be there for them?
1. If you’re over 50 and see noticeable blood in your urine – see a urologist.
2. Learn all you can about your cancer and its treatments. There are all kinds of great support and information sites on the Web.
3. Get to a NCI (national Cancer Institute) cancer center for treatment if at all possible.
4. Write down every question you can think of and make sure your doctors answer them to your satisfaction.
5. Be positive. Think positive. Enjoy life and all those around you.

And there you have it. A champion.
Congratulations, Joel! We are so proud to call you a Cornerstone family member and we are all blessed to have your positive light shine through our office halls. We are all better for knowing you and learning from your amazing example.

Please hold on. We are generating the report for you.
Fill out the form below and someone from our team will reach out to you soon.