Licensing as Debt Buyer: Who to Trust? 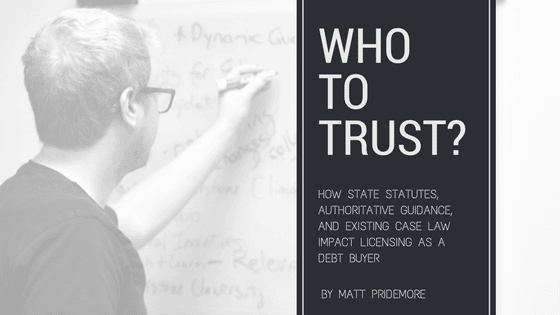 Although knowing how to license as a debt buyer has always been a challenge, it certainly isn’t getting easier. The list of potential licenses that might apply to debt buyers is continually expanding, and the plaintiff’s bar continues to pursue licensing related cases against debt buyers. In addition, courts have in some cases ignored authoritative guidance provided by state regulators which debt buyers rely on to help interpret whether the underlying licensing statutes should apply.

Up until the recent Oregon bill (HB 2356) which created a specific debt buyer license, states typically regulated and licensed debt buyers indirectly through their debt collection statutes and related rules. The primary question was whether the activities performed by the debt buyer were consistent with the activities of a collection agency as defined in the underlying state statute. Since debt buyers are not collection agencies, the answer to that question was not always clear. Recognizing this fact, regulators, career bureaucrats, and industry advocates have consistently pushed for clarification at the legislative level. In some states, they have been successful in doing so. In North Carolina, for instance, the North Carolina General Statutes were amended to clearly include both active and passive debt buyers in their definition of a collection agency. In many cases, however, even the final legislative language did little to provide clarity. In Maryland, statutes were amended to include in the definition of a collection agency persons who engage directly or indirectly in the business of collecting a consumer claim the person owns if the claim was in default when the person acquired it. Unfortunately, while this amendment was helpful in providing some clarity around whether an active debt buyer was a collection agency in the state it did little to clearly provide guidance for passive debt buyers.

If the underlying statutes are not clear, debt buyers look for published authoritative guidance from the regulator or existing case law to help determine whether a license is required. Unfortunately, courts are not bound by authoritative guidance or existing case law. In fact, courts have recently made some astonishing rulings against debt buyers. In June 2006, the Massachusetts Division of Banks issued an opinion that stated that “it is the Division’s position that entities purchasing debt in default at the time of purchase . . . must be licensed as debt collectors.” Following the issuance of that published Industry Letter, the Division received several inquiries as to whether a passive debt buyer also must be licensed as a debt collector. In October 2006, the Division published a response stating that “it is the position of the Division that a debt buyer who purchases debt in default but is not directly engaged in the collection of these purchased debts is not required to obtain a debt collector license provided that all collection activity performed on behalf of such debt buyer is performed by a properly licensed debt collector in the Commonwealth or an attorney-at-law licensed to practice law in the Commonwealth.” Earlier this year, a large passive debt buyer received a stunning threefold loss in the Massachusetts Appellate Division after failing to be licensed based on the above opinion. The court held that they violated the Massachusetts Debt Collection Practices Act (MDCPA), the Fair Debt Collection Practices Act (FDCPA), and the Massachusetts Consumer Protection Act (Chapter 93A) by failing to be licensed.

As if this is not confusing enough, most states also have statutes that require licensing or registration related to consumer lending. It is common for a large consumer lender to maintain multiple licenses or registrations within a specific jurisdiction in order to offer all their desired products to the consumer marketplace. Unfortunately, a significant number of the underlying statutes include someone who “takes assignment of” the related consumer loan in the definition of “lender.” As such, debt buyers (both active and passive) in many instances are required to not only license as a collection agency but also to hold the same licenses or registrations as the originating creditor. For example, Title 28 of the Idaho Code on Commercial Transactions states that unless a person has first obtained a license from the administrator authorizing him to make regulated consumer loans, he shall not engage in the business of making regulated consumer loans or taking assignment of and undertaking direct payments from or enforcement of rights against debtors arising from regulated consumer loans.

Where This Is Headed

There is much more confusion around what licenses a debt buyer is required to hold than what a traditional third-party agency is required to hold. As such, there is a lack of consistency and no apparent industry standard. Because the plaintiff’s bar recognizes this, they will continue to find more holes in regulations, and the number of licensing related lawsuits against debt buyers will only increase.

Oregon is the first to release the new debt buyer specific license, but other states may not be far behind. Additionally, additional licenses such as lender and mortgage licenses are only going to become more prevalent. Because of this, it is more necessary now than ever that debt buyers evaluate licensing requirements prior to purchasing a portfolio in a new asset class.

What Should I Do

If you are a debt buyer, it is imperative that you understand what licensing or registration requirements are needed for each consumer debt portfolio you are looking at prior to purchase and subsequent collection efforts. Be conservative in your approach and get a legal opinion. Have that opinion updated as your portfolio changes – different asset classes require different licensing. Amidst all the confusion, remember that there are experts in the industry who are able to take care of all your licensing problems.

Drop us a Message :
Sitemap
Address
70 Mansell Court, Suite 250,
Roswell, GA - 30076
Mail Us
E-mail:
[email protected]
Call Us
Call:
1-888-650-3240
Follow US
COPYRIGHT © 2019 · CORNERSTONE SUPPORT. ALL RIGHTS RESERVED. Minneapolis Web Design
Please hold on. We are generating the report for you.
Fill out the form below and someone from our team will reach out to you soon.

Sign-up for the cornerstone newsletter & e-blastsStay informed on any new licensing changes.
wpDiscuz